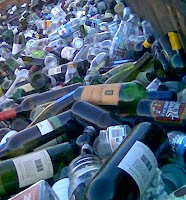 And they that won't with us comply,
Down among the deadmen let them lie.
Not much of one, it turns out. The "deadmen" were the empty bottles that piled up on the floor under tavern tables. The lyrics go on to toast women, food, drink and Bacchus, the god of pleasure himself. This isn't a song of war but of merrymaking.
_________________
ELENASANTANGELO is the principal music researcher and arranger for Colonial Revelers.
Posted by Historical Harmonies at 8:56 AM