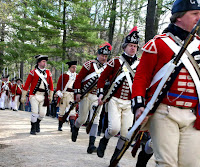 ﻿Tradition has it that, on April 18, 1775, British troops on the road to Lexington and Concord, marched to a popular tune that was later published in London as "The Lexington March." We know the song as "Yankee Doodle."

A HISTORY OF YANKEE DOODLES
by Elena Santangelo
Brother Ephraim sold his cow
And bought him a commission,
And then he went to Canada
To fight for the nation;
But when Ephraim, he came home,
He proved an arrant coward,
He wouldn't fight the Frenchmen there
For fear of being devoured.
During the French and Indian War (1754-1763), a new fiddle tune reached hit parade status when British troops put words to it that made fun of the Colonial militias fighting alongside them. The verse above has been attributed to British army surgeon Dr. Richard Schuckburg and may be the earliest rendering of the song.

Soon colonial versions of the song cropped up, this one from the early 1770s:

There is a man in our town,
I'll tell you his condition,
He sold his oxen and his cow
To buy him a commission.
(Chorus:)
Corn-stalks twist your hair off,
Cart-wheel frolic round you,
Old fiery dragon carry you off,
And mortar pessel pound you.
A few years later, a verse popular with the Tories:

Yankee Doodle's come to town
For to buy a firelock,
We will tar and feather him,
And so we will John Hancock.
Edward Bangs was a Minuteman believed to have participated in the April 1775 battles. He wrote the most widely known version of the song, though no one knows when, but it had to be before July 1775 when Washington went from Captain to General. In all, he wrote 14 verses.

Father and I went down to camp
Along with Captain Gooding;
And there we saw the men and boys
As thick as hasty pudding.
(Chorus:)
Yankee Doodle keep it up,
Yankee Doodle dandy,
Mind the music and the step
And with the girls be handy.
And there we saw a thousand men
As rich as Squire David,
And what they wasted every day,
I wish it could be saved. (chorus)
Many versions of "Yankee Doodle" were ballads commemorating battles and events. In January 1778, during the British occupation of Philadelphia, David Bushnell (the inventor of the submarine) came up with the idea of floating incendiary mines (made from powder kegs) downstream to the British warships anchored in the Delaware River. On January 9th, the New Jersey Gazette reported that the Regulars had been mustered to fire upon the kegs:

"Every chip or stick that floated by was a target for the vigor of the British arms. The action commenced about sunrise and lasted until noon, when the kegs were ... put to flight .... The British withdrew and celebrated the occasion as a great victory, receiving congratulations for their bravery and valor!"

Francis Hopkinson, a signer of the Declaration of Independence, immortalized the events in a parody called "The Battle of the Kegs." (11 verses)

Gallants attend, and hear a friend
Trill forth harmonious ditty,
Strange things I'll tell, which late befell,
In Philadelphia city.
'Twas early day, as poets say,
Just as the sun was rising,
A soldier stood on a log of wood
And saw a thing surprising.
As in amaze he stood to gaze,
The truth can't be denied, sir,
He spied a score of kegs or more
Come floating down the tide, sir.
A sailor, too, in jerkin blue,
This strange appearance viewing,
First damned his eyes in great surprise,
Then said, "Some mischief's brewing."
In 1780-81, British General Cornwallis took the war into the Carolinas and Virginia, followed by American General Nathaniel Greene who used guerilla tactics to wear down the British troops. A version of Yankee Doodle titled "Cornwallis' Country Dance" resulted. (7 verses)

Cornwallis led a country dance,
The like was never seen, sir,
Much retrograde and much advance,
And all with General Greene, sir.
They rambled up and rambled down,
Joined hands, then off they run, sir,
Our General Greene to Charlestown,
The earl to Wilmington, sir.
Hundreds of other lyrics were concocted during the war, on both sides of the Atlantic. However, the one where the feather in the hat becomes "macaroni" wasn't published until 1852 and probably wasn't sung during the Revolution.

(Source: SONGS OF THE REVOLUTION, compiled and edited by Irwin Silber, Stackpole Books, 1973)

The Edward Bangs version of Yankee Doodle, with one additional verse, can be heard on Colonial Revelers's CD, REVELRY, REFLECTION & REVOLUTION.
Posted by Historical Harmonies at 8:10 AM