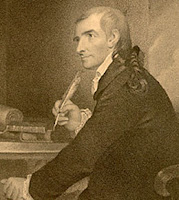 Most Americans don't recognize the name of Francis Hopkinson. Some know enough to state that he was a signer of the Declaration of Independence.  Beyond that, he's been more or less lost to history, but this patriot ranks right up there with Franklin, Jefferson, Hancock and Washington.

Hopkinson was born and died in Philadelphia, and lived part of his life in New Jersey, representing that colony in Congress.  He was in the first graduating class of the College of Philadelphia (which merged with the University of Penn in 1791), then studied law.  He also served on the committee that drafted the Articles of Confederation.  Besides becoming a lawyer, statesman, and jurist, he's been described as "a mathematician, a chemist, a physicist, a mechanic, an inventor, a musician and a composer of music, a man of literary knowledge and practice, a writer of airy and dainty songs, a clever artist with pencil and brush and a humorist of unmistakable power" (Tyler, Literary History of the American Revolution).

It's as a writer and musician that we'll discuss him here.  He is credited with being America's first secular poet-composer, having published his first song in 1759 at the age of 21.   Hopkinson also became well-known for his essays, many of which were satirical, such as his "Typographical Method of conducting a Quarrel" and "Essay on White Washing."

He combined his songwriting and satires during the Revolution to produce works such as "The Treaty," "The New Roof:  A Song for Federal Mechanics," and "The Battle of the Kegs."  The latter song was set to Yankee Doodle and comically described an incident that took place in January of 1779, when the British occupied Philadelphia.  The Continental forces were  experimenting with floating mines made from powder kegs.  They sent them down river toward the city in an attempt to damage the British ships docked there.  Redcoats were dispatched to shoot at the kegs, to set them off before they could do harm.  Hopkinson's song told of the brave British troops valiantly waging war against the kegs. Here's a verse:


The royal band now ready stand,
All ranged in dread array, sir,
With stomachs stout to see it out,
And make a bloody day, sir.
The cannons roar from shore to shore,
The small arms make a rattle;
Since wars began, I'm sure no man
E'er saw so strange a battle.
About the same time, Hopkinson wrote a tribute to Washington entitled "A Toast."


'Tis Washington's Health,
Fill a bumper around,
For he is our glory and pride;
Our arms shall in battle with
Conquest be crowned,
Whilst virtue and
He's on our side.
"A Toast" can be heard on Colonial Revelers CD Revelry, Reflection and Revolution. See our website for details.

As always, your humble servants,
HH
Posted by Historical Harmonies at 6:50 AM