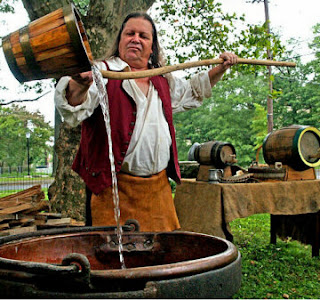 If barley be wanting to make into maltWe must be contented and think it no faultFor we can make liquor, to sweeten our lips,Of pumpkins and parsnips and walnut-tree chips.American folk song, circa 1630
Your servants,
HH
Posted by Historical Harmonies at 12:18 PM

Small beer was not "watered down" beer, but rather beer that was intentionally brewed to have a lower alcoholic content then the regular beers and ales of the time.

An example of a small beer is that made from the recipe that George Washington recorded in one of his journals that is currently in the collections of the New York Public Library.

The recipe is available through a number of websites including: http://www.beerhistory.com/library/holdings/washingtonrecipe.shtml