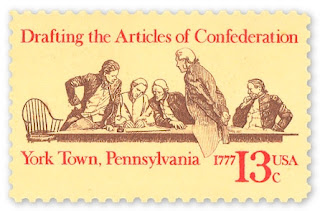 "The better to secure and perpetuate mutual friendship and intercourse among the people of the different states in this union, the free inhabitants of each of these states, paupers, vagabonds and fugitives from justice excepted, shall be entitled to all privileges and immunities of free citizens in the several states..."

In March of 1781, the Articles of Confederation were adopted, the first document seeking to control the chaos of a king-less government. The Articles were adopted by the Continental Congress in 1777, but took more than 3 years for the states to approve. Our first clue that democracy would be a slow process.

The Articles mostly stated that the states would run themselves as nearly separate countries. Only certain interstate issues were covered, such as the rights of citizens to cross into and trade with other states. From the quote above, we see that all free inhabitants were entitled to all privileges and immunities, unless you were a slave, indentured servant, fugitive, vagabond, or poor. Then again, that's more rights than granted by the original Constitution. Yet, since the Articles said that states ran themselves, the states themselves could revoke these rights anytime they wished. The Articles provided for no Federal Government, so no enforcement of the document was possible. The Articles had no real teeth.

In May of 1787, the states sent representatives to Philadelphia with the intention of rewriting and fixing the Articles of Confederation. Within six weeks, the convention had decided to scrap the document and draw up another, completely reorganizing the government. This new document, of course, became the United States Constitution. This time, approval was fairly quick. Ratification took place in June of 1788.

Still, it took nearly a year for enough representatives to make their way to New York City (then the national capital) to reach a quorum in the House. Their first session began, appropriately, April 1, 1789. The Senate was slower. By April 6, only 9 of 22 senators were present. This didn't stop them from voting in a president, though. Luckily, they picked George Washington.

Your obedient servants,
HH
Posted by Historical Harmonies at 10:57 AM