We Love A Parade

﻿"...in passing thro' the City...great attention given by the officers to see that the men carry their arms well, and are made to appear as decent as circumstances will admit."
Washington's orders, Aug. 23, 1777 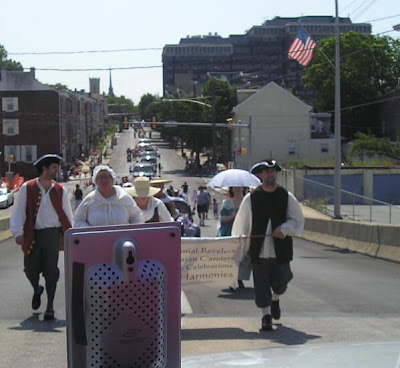 On August 24, 1777, Front Street in Philadelphia was the site of a Grand Parade of the Continental Army. The troops were on their way south, to defend the city from the British who were landing along the Chesapeake. Washington decided to take advantage of the situation to flaunt his troops, hoping to win support from the citizens. He took the precaution of sending some of the sutlers and less reputable camp followers (i.e. whores) down to Delaware by another route.

The word "parade"--coined in the 17th century--originally meant to prepare and was used in a military context. Parade grounds were places for troops to practice maneuvers and eventually to display the troops abilities to superior officers and important visitors. This sort of formal, ceremonial marching came to be known in itself as a parade. If the troops were cavalry, it was called a cavalcade.

In the 18th century, "parades" were always military. Civilians held processions or promenades, for weddings, funerals, religious feasts, and holidays like May Day.

By the mid-19th century, the distinctions began to fade. After the Civil War, veterans groups and Ladies Auxiliaries joined military parades held in cities and towns for holidays. Civic bands joined in, then Temperance Leagues, Scout troops, school bands, athletes and cheerleaders. As towns acquired fancy new equipment for their fire and police departments, they'd shine them up to show off to the spectators. And, naturally, all the local politicians would be in attendance, dressed up in their best and waving flags.

Parade floats supposedly got their start in the Middle Ages, when traveling passion plays put their scenery on horse wagons. The name "float" came from the decorated barges on the Seine during the Lord Mayor's Show, a public holiday in London. And, of course, traveling circuses also used floats to arouse interest in their shows. After World War II, even the military used floats, topped by large cannons and missiles. 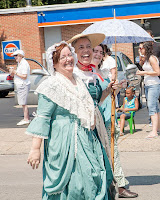 This past July 4th, we in Colonial Revelers walked in our first parade. In front of us were County Sheriff Department vehicles. Behind were kids from the local Tai Kwan Do school. The parade included all the traditional participants--high school band, church groups, fire trucks--but also motorcycle clubs, and even a paranormal investigation team.

The best thing about the parade were all the spectators, people from all races, religions and walks of life, all smiling, cheering and waving American flags. We discovered that day that the parade in America had evolved into something that brought everyone together.

Looking forward to next year.

Your obedient servants,
HH
Posted by Historical Harmonies at 8:56 AM